Shaaban Robert is probably the best known and celebrated modern East African poet.  He was born January 1, 1909 in the village of Vibamba south of the Tanzania town of Tanga.  He died in a close-by village of Machui on June 20, 1962.  His poems have been widely published and republished in numerous publications.  His works have been the subject of critical analysis by East African academics; some of these works are listed in the Bibliography. 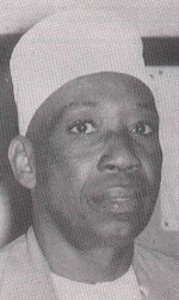 His poems so far studied here are: